In 1752, Benjamin Franklin and his fellow firefighters founded The Philadelphia Contributionship, the longest tenured insurance company in the country.

We insure homes — where people put down their roots, where families are built, and futures take shape. Yet we don’t just insure dwellings; we protect the dreams of the people inside. The communities they comprise. The history that they make. For us, it all comes back to roots. Ours. Yours. And the future you seek to create and we seek to protect.

Philadelphia was a relatively small town in 1752 with approximately 15,000 inhabitants and 8 volunteer fire companies. Fire prevention elements played a large role in the planning of the city; streets were wider than average and brick and stone were common building elements. Despite preventive measures and the efforts of firefighters, fires did still occur. Insurance offered a safety net and Philadelphians were quick to take advantage of it. A notice appeared in The Pennsylvania Gazette advertising the new venture in February and by April there were enough interested subscribers to hold a general meeting and elect a board of directors. By June the directors were issuing seven year renewable term policies, covering only the building. Policyholders would pay a deposit, refundable at the end of that seven year period, minus a small fee for the survey, policy and fire mark.

Prior to accepting a property for insurance, the company sent surveyors out to inspect each building. The directors reviewed these reports and then set the rate. Changes came swiftly in early years; the directors established a capital fund in 1763, out of which losses and office expenses could be paid, and petitioned for permission to incorporate, granted by the Pennsylvania Assembly in 1768 and the Court at St. James in 1769.

The company switched to a perpetual policy in 1810 whereby insurance remained in effect permanently until it was canceled and early limits of insurance were ten miles from the center of Philadelphia. The company’s daily operations were managed by the company’s clerk ou 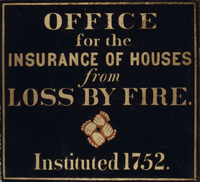 t of his store or counting house with a treasurer overseeing the funds. In 1835 the company finally acquired its own permanent office, designed and built by Thomas U. Walter. It operated as an office for the company, meeting place for the directors and home for the treasurer and his family. This remains the company’s headquarters although additional offices are also maintained in the adjacent building.

zation which owns the insurance companies and Vector Security Holdings.

“Contribution” was defined in Sheridan’s 1793 dictionary as “ that which is
given by several hands for some common purpose,” symbolized by the company’s clasped hands logo. Both the company’s name and logo are a testament to the fact that regardless of the corporate structure, the company’s mission remains the same of providing insurance protection for its neighbors in the urban community.

On May 11, 1752, newly elected director of The Philadelphia Contributionship Philip Syng was ordered to provide a seal for the company. Five days later, Syng, the well known Philadelphia silversmith was requested to “get such a seal as Ordered…” This began the company’s equipping of its office for business.

The directors soon commissioned a seal press to house the seal and later a frame to hold it, a walnut box to keep the deeds, mortgages and other papers, and a bookcase to hold the company’s books. They purchased books; Franklin printed policies and had the articles of agreement engrossed by mapmaker Lewis Evans. While the earliest furnishings do not seem to have survived, the records have; the articles of agreement, the surveys, the minutes and journals form the core of the company’s archives. 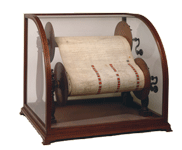 Over time the directors added a few more items to the company’s inventory: an iron chest in which to store the records, a box for the articles of agreement, a sign for the office, a case “to contain the surveys in the fire proof vault” and some chairs. Furnishings were kept to a minimum as the company continued to rent office space well into the 19th century. With the building of the company’s first permanent office in 1835-1836, The Philadelphia Contributionship began to acquire furniture for its office and directors rooms, carpeting, floor cloths, linens and table ware. 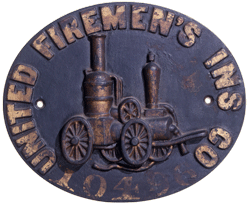 Throughout the 19th and early 20th centuries, the directors continued to furnish these spaces, adding or replacing furniture with new pieces as needed, but never discarding the old simply for the sake of fashion. Consequently the company’s board and dining rooms are filled with mismatched pieces, beautiful bird’s eye maple and curly maple chairs from the 1830’s and 1840’s surround mahogany tables from 1860 and 1912. Michael Deginther, a Philadelphia cabinetmaker provided a massive sideboard and serving table in 1860 carved with the company’s clasped hands logo. Tall gilt edged mirrors from the 1830’s fill the space between the mantle and the moldings, filling the room with light and reflecting the portraits of past chairmen of the board, a tradition begun in the 1850’s. The company’s collections are working collections with many items still used f 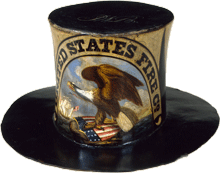 or the purposes for which they were commissioned. They are an ongoing reminder of the company’s past.

Mindful of its heritage the company also began to collect insurance memorabilia in
the late 19th and early 20th centuries along with artifacts from Philadelphia’s volunteer fire companies. Parade hats, firefighting tools and fire marks are examples of early business practices can be seen in the company’s first floor exhibits.

Stroll through the streets of Philadelphia’s older sections and look up. There between the second and third stories of houses you’ll often see a plaque or badge, made of lead or iron, sometimes mounted on wood. These are fire marks or insurance badges, which indicate that the house was insured and which company insured it.

Fire marks come in various shapes and sizes and early ones were colorfully painted and eye catching. They were first found in Great Britain when insurance companies needed to alert their own fire brigades that the property fell under the protection of that company. London in the late 17th and early 18th century had no municipal or volunteer fire protection. Subsequently insurance companies hired their own fire brigades, made up of watermen from the Thames River and “marked” their insured properties. They outfitted the brigades with equipment and the firefighters with colorful uniforms and hung fire marks on insured properties, badges of lead bearing the symbol of the insurance company and the policy number of the insured.

Philadelphia had a volunteer firefighting system in place when The Philadelphia Contributionship formed so there was no need to “mark” the property for the fire brigade. However, the early directors of The Philadelphia Contributionship recognized that fire marks served multiple purposes. In addition to identifying the property for the company at a time when street numbering systems were uncertain, they may have served to discourage arson, and possibly to encourage other policyholders to pitch in and help fight the fire if they saw a burning building. This was a mutual company, and policyholders shared in profits and losses. In 1755, The Contributionship’s directors required that all policyholders attach fire marks to their properties after fire damaged Edward Shippen’s house.

“The Directors, observing that much of the Damage was done thro’ Indiscretion, which they think might have been prevented had it appeared by the Badge being placed up to Notify that the said House was so immediately under their Care.”

The Contributionship’s first fire marks consisted of four clasped hands mounted on rectangular boards. Over the years different shapes were used, but very quickly the shield became the predominant form. Like the British fire marks, they were originally brightly painted. The shield was painted black and the hands gilded. The policy number was painted as well.

The Contributionship issued fire marks from 1752 until the 1830s and then again in the early 20th century. They are still given to perpetual policyholders today and can be seen on many homes in the Society Hill area. Instead of the policy number, the company’s founding date, 1752, appears below the hands.

Variants of the Contributionship’s fire marks as well as marks of other companies can be seen in the company’s museum, which can be seen by appointment, and in fire museums around the country. The Philadelphia Fireman’s Hall Museum has one of the largest collections, www.firemanshall.org.

Visit Our Building and Museum

In 1835, the Directors of The Philadelphia Contributionship commissioned Thomas U. Walter, one of Philadelphia’s leading architects to design an office for the company, a meeting place for the trustees and a home for the treasurer and his family.

Walter’s Greek Revival style building, now a National Historic Landmark, has served as the company’s headquarters since its completion in 1836. While the last treasurer’s family moved out in 1898 and the entire building was converted to office use in the 20th century, an unmistakable aura of elegance surrounds these contemporary offices.

The second floor directors’ meeting rooms continue to be used for monthly meetings and are furnished with wonderful examples of Philadelphia furniture from the 18th, 19th and early 20th centuries. A stuffed woodcock peers at visitors from its perch on the mantle and tall case clocks chime solemnly, marking the passage of time.

A small museum area on the first floor showcases the company’s key documents, including the original 1752 Articles of Agreement hand engrossed on sheets of parchment. A counting house desk with brass lighting gallery provides a central focus to the area which also includes an exhibit of fire marks and artifacts from Philadelphia’s volunteer fire companies. The museum and upper floors are open to visitors by appointment only. Call (215) 627-1752 ext. 1286 or email:csmith@1752.com to make an appointment or for more information.

We welcome you to dive into history and explore The Contributionship’s Digital Archives.
Click here to visit the Archive.